Once again we are proud to present The SEEK Project for high achieving Year 5 pupils this summer.

The schools that are taking part are Hollybush, Hertford St Andrew, Bengeo, Watton at Stone and Tewin Cowper. These schools have nominated their high achievers to work alongside Sele students and staff in fun, challenging activities which take place on two Saturday mornings here at the school.

Harry Potter is the theme for the first session where pupils will be expected to translate Parseltongue, create a Hippogriff and make a life-sized model of Hagrid!'

The Project started in 2017 and also ran very successfully in 2018 with participants enjoying two fun filled Saturday mornings that expanded their knowledge while improving their confidence in accepting and tackling new challenges.

This year sessions have taken place on Saturday 15 June and Saturday 13 July 2019. 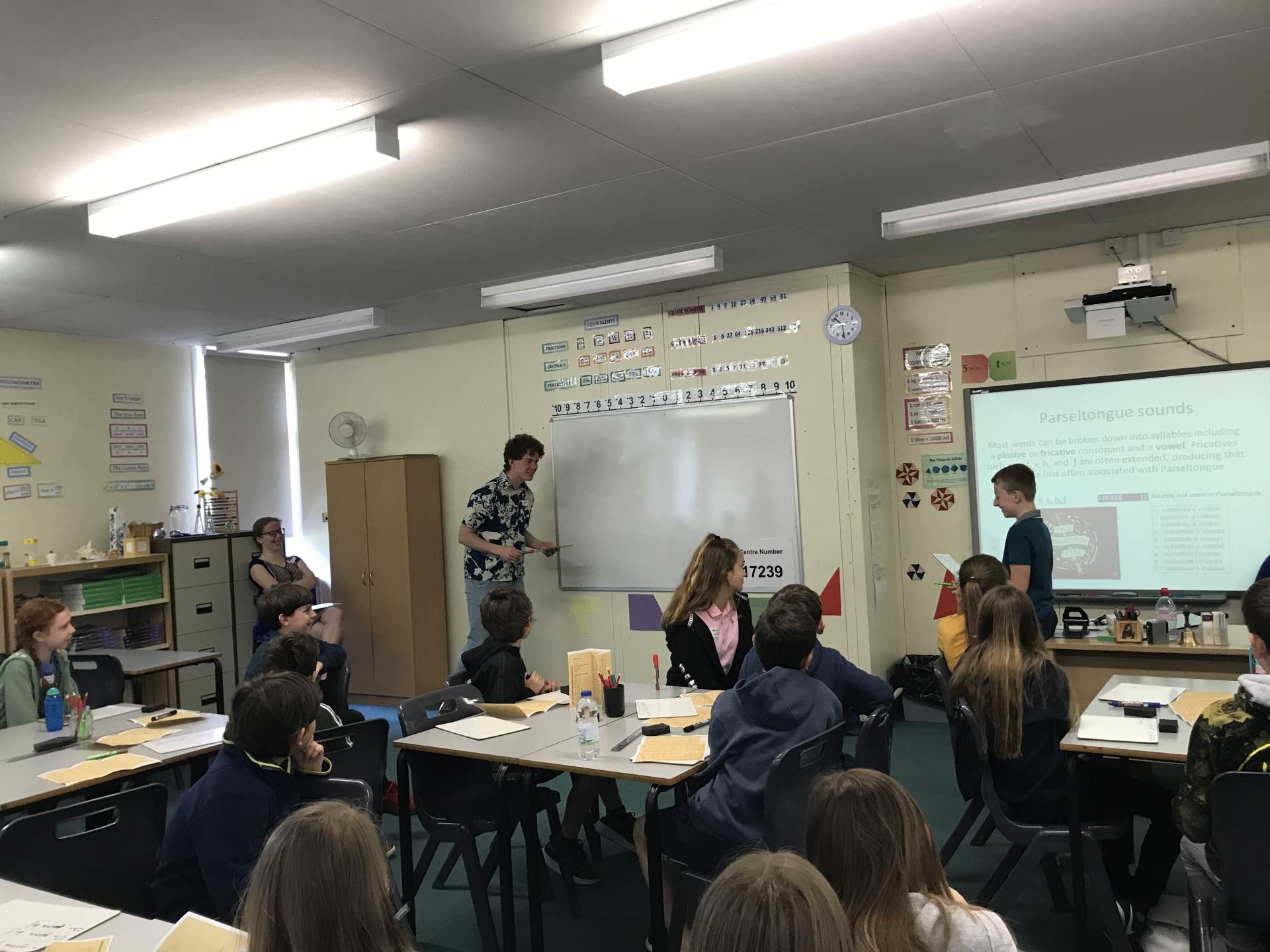 This was followed by ‘Hagrid’s Hand’. Students were put in groups and given a photocopy of Hagrid’s Hand which was obtained by Mrs Jackson when she 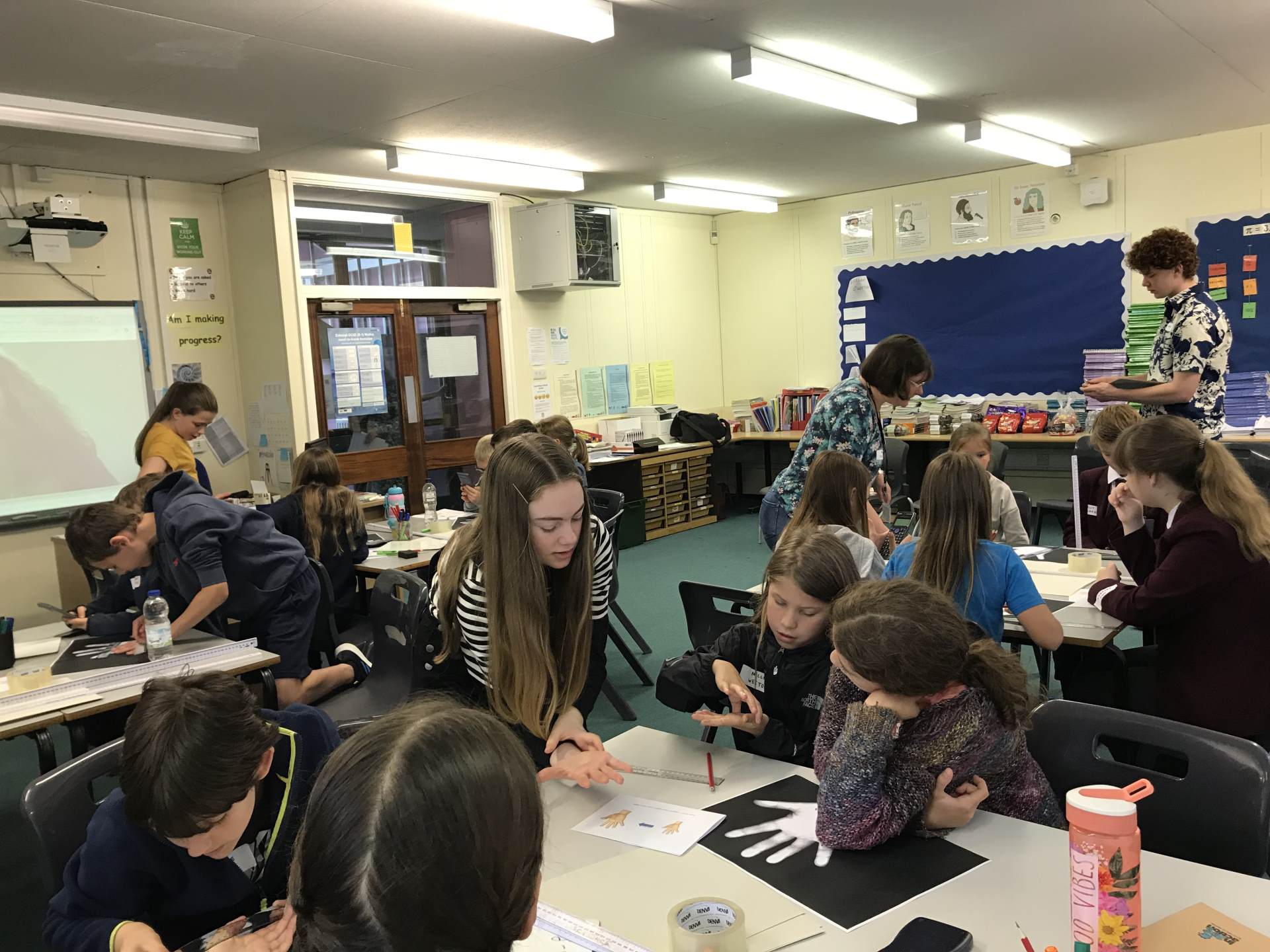 happened to bump into Hagrid in a tea shop near Elstree Studios! Students then had to measure their own hands to obtain the scale factor so that they could enlarge their limbs and torsos in order to create a life-sized 2D model of Hagrid! He ended up being over 2.5 metres tall!

During the short break, students had to convert the price of their snacks from Muggle Money to Wizarding Money. This was more challenging for the students than it first appeared as the conversion rates from Gringotts Bank involved some beautiful prime numbers:

1 gold galleon is worth 17 silver sickles.

1 silver sickle is worth 29 knuts.

The activity that followed next was the introduction to ‘How can a Hippogriff fly?’ We discussed the anatomy of a hippogriff – half horse, half 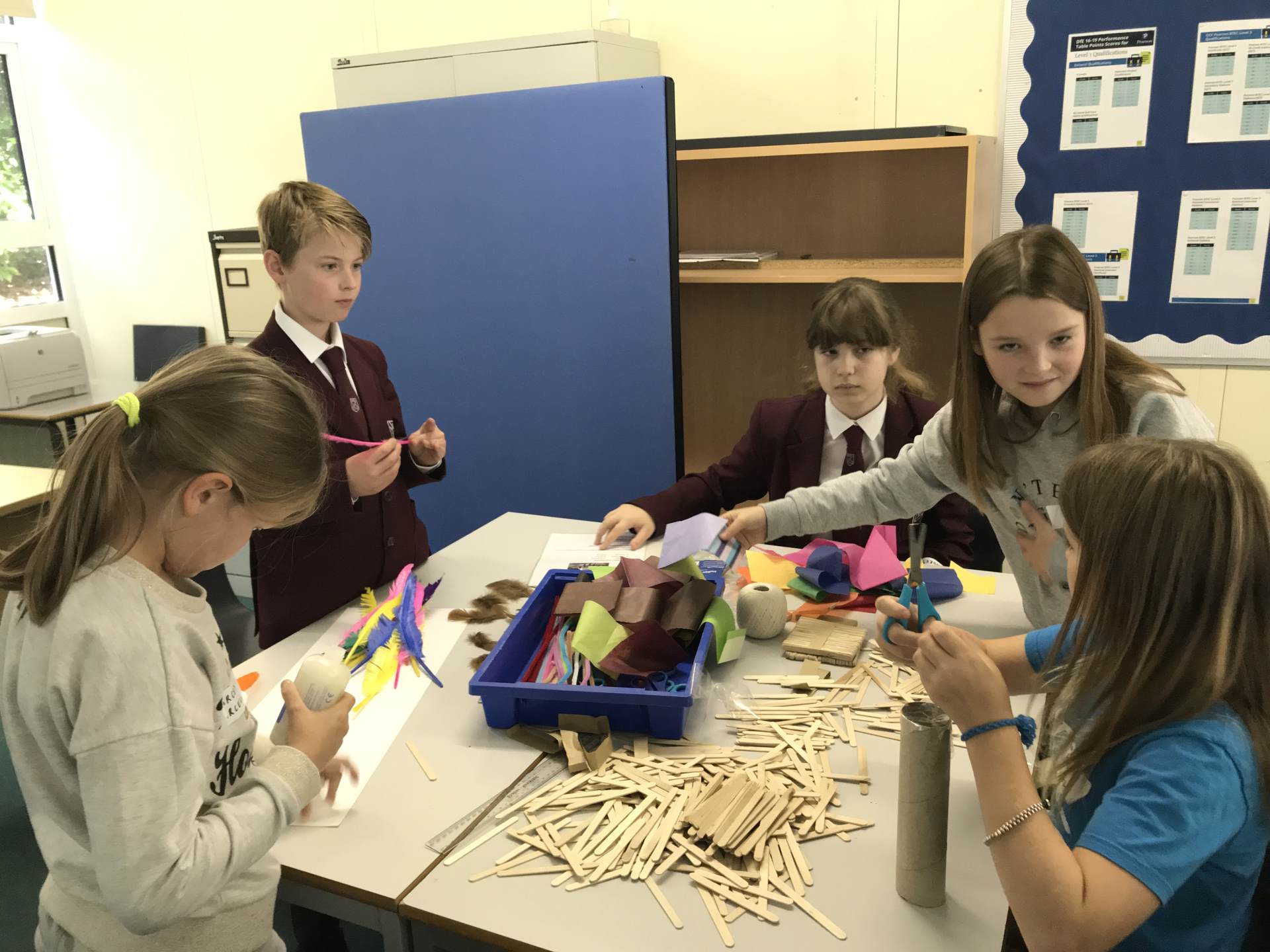 eagle – and stated the hypothesis:

‘A hippogriff can fly due to the ratio of its wing span to body length’.  The students then worked in groups to build their own scaled model of a hippogriff using the scale 1:10.

In our second session of The SEEK Project which took place on Saturday 13th July 2019 the students finished their hippogriff models which were then stored to be test-flown later that day.

The theme of our second session was ‘Animal Kingdom’

Our next activity was ‘Anthropomorphic Poetry’. Here the Seekers listened to Miss Overington recite ‘The Owl and the Pussycat’ by Edward Lear. They discussed the anthropomorphic properties of the poem and then discussed how Lear’s use of poetic techniques such as rhyme, rhythm and repetition make this poem easy to learn off by heart.  They then had to learn the poem and recite to the whole group. 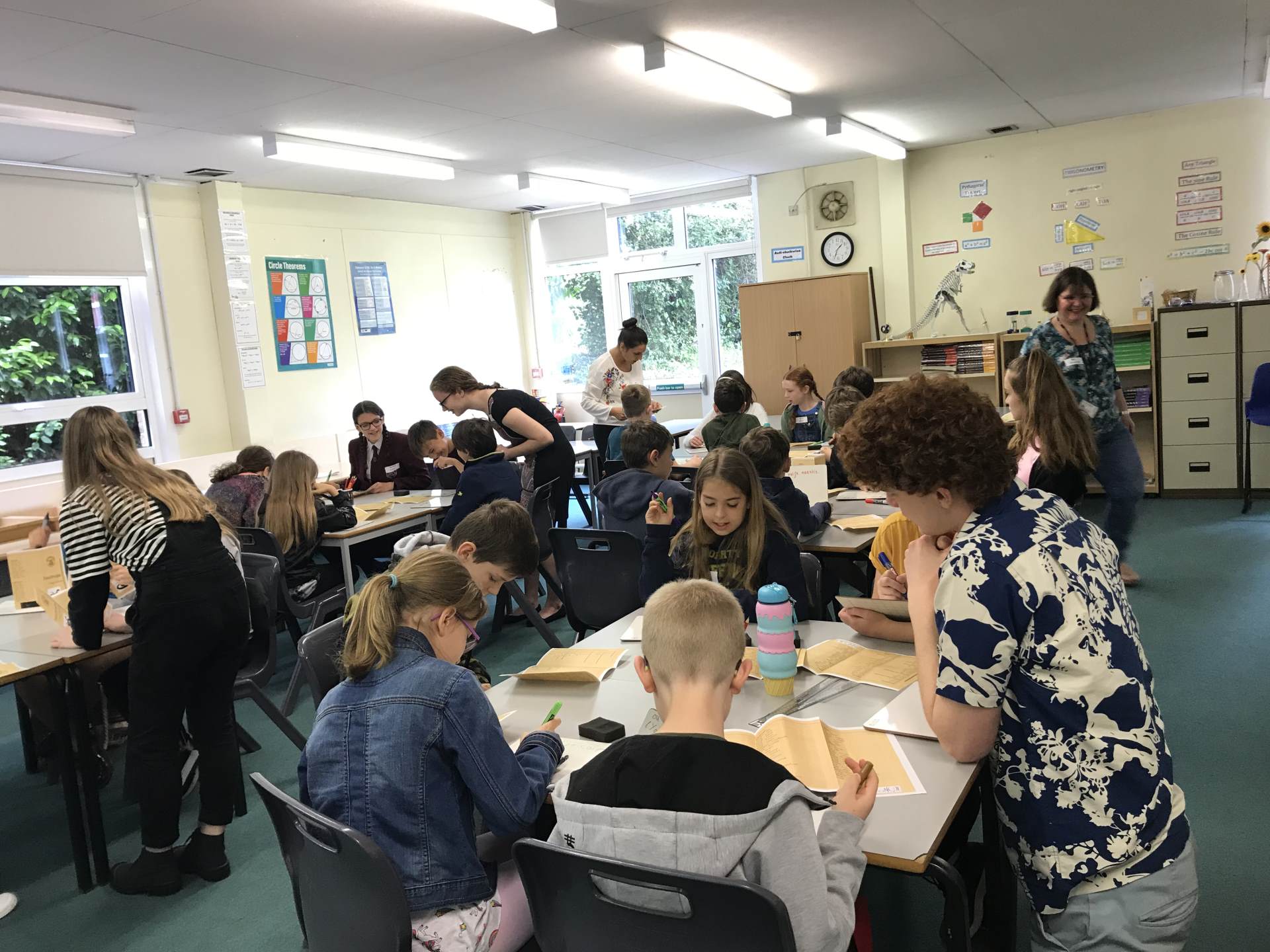 They were brilliant! Great fun was had by all.

During the short break, the Seekers had to match a selection of animal names with their Latin name. For example, they deduced that an ‘Equus caballus’ is a ‘horse’ and a ‘Panthera leo’ is a ‘lion’ These were challenging for the students but they used their knowledge of the languages they have studied to successfully complete the 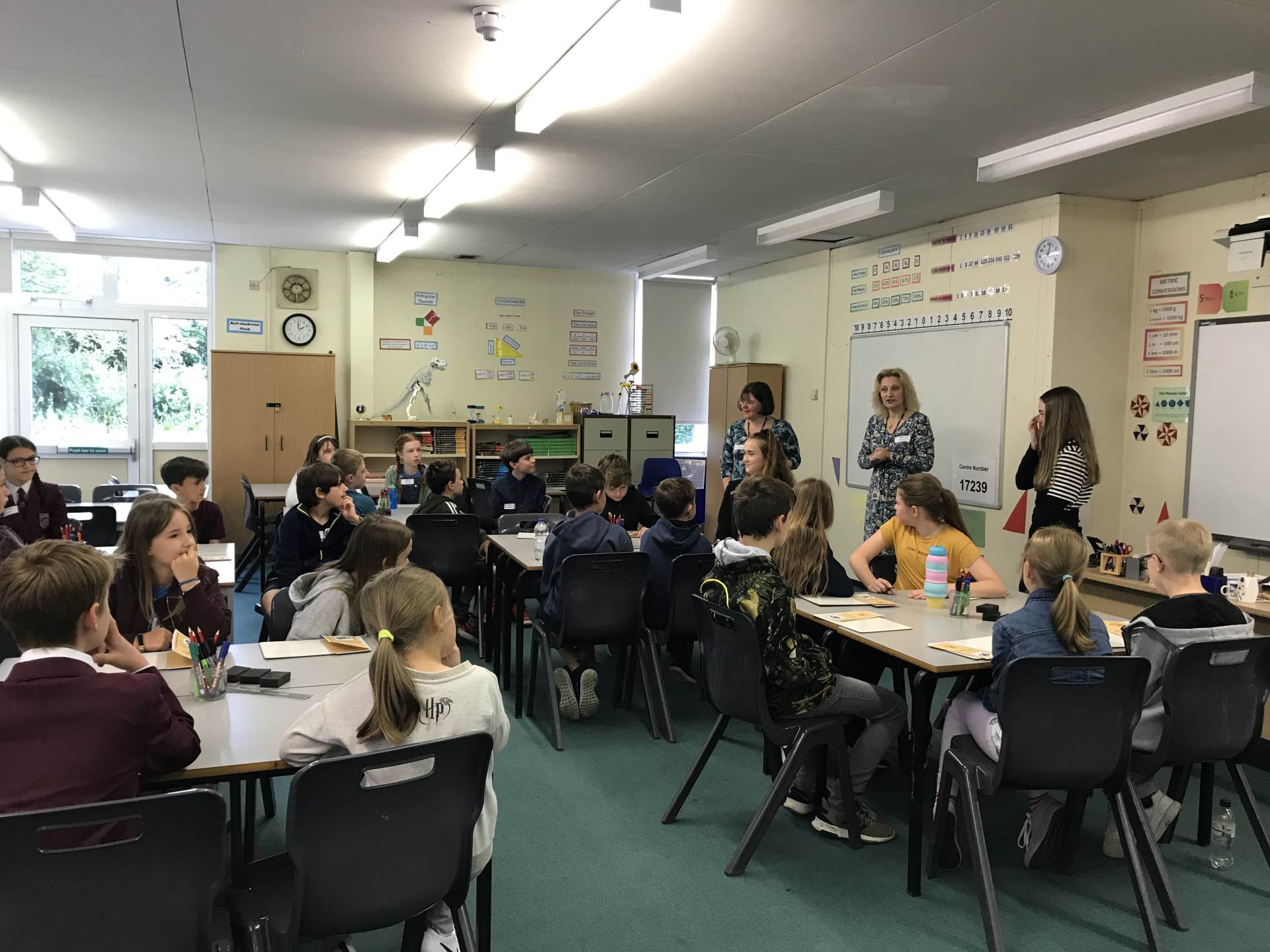 Our final activity, before the highly anticipated test-flights of our hippogriffs, saw the Seekers running and puzzling in the ‘Animal Classification Relay’. The students were in teams and raced against each other to be the first team to create a dragon! They did this by identifying different animals from obscure clues derived from the its classifications and attributes. Once identified, they won a piece of the dragon puzzle. Great fun! 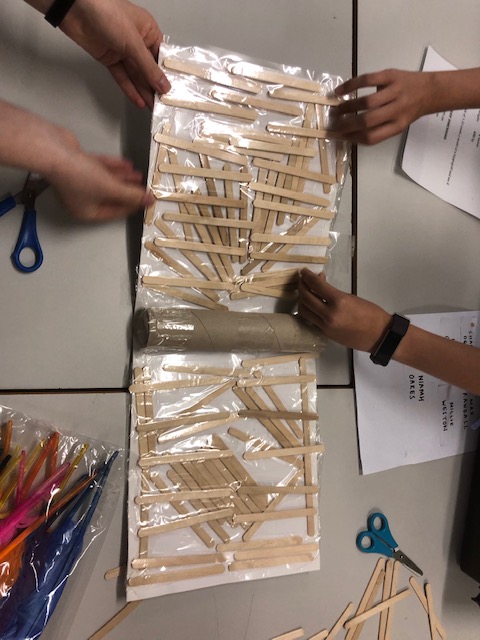 Finally, in the test flights, the hippogriffs did not fly very well! We discussed whether this was sufficient proof to disprove our hypothesis and we agreed that we needed to consider whether this was a fair test and how to refine and improve our models. It was suggested this could be done by distributing the body mass more evenly, making the models more aerodynamic and making wings that were flexible enough to flap.

Another highly enjoyable and fun-filled year of The SEEK Project!

Our thanks go to all the students who took part and to the staff who ran the project.